39:  Imaginary Casks
Night of wine, family.  With my cousin Nick having dinner with Mom, Dad, me.  It was interesting to see Nick’s reaction to the ’08 Spring Mountain Cab.  He enjoyed its harmony with the filet mignon Mom prepared.  Once back at my base, Nick and I fiddled with ideas for my wine business, generating revenue from the other blog, 1StopWineBlogShop.com.  Just discussion stages, presently, but altogether exciting, encouraging.  The book, haven’t started editing.  Promise to start tomorrow.  And if not, Sunday, when back from the Kaz tasting Room.
Can only hope my and Katie’s Cab has such eloquence in its palate speech, connection.  But I need to stop doing that, all the comparisons.  Suppose it’s only natural, but still.  How I’ll sell my wine, and all the other wines from 1Stop, will be gentle.  I’m not the type to be encroaching, excessive, close obsessive, aggressive.  As I told Nick: I’m a writer, before anything else.  I’m aiming for TOTAL lucrative Autonomy in wine’s industry.  This 2ndary blog, soon to be primary, stands as the leading way to do such, at Writing’s side.
See mySelf, visibly, paginated visions, in a hotel Room, after a talk with wine industry people.  In Georgia.  Atlanta.  Never before been, and here I am.  I was booked from my humble, but not to dismiss respectable, recognition as a writer, blogging wine merchant.  I’d speak of Sonoma County, Napa, Monterey, how I love Cabernet.  I’d field a few probes, respond the best I could, then off to a tasting event with music, apps, conversation with other wine walkers, wonderers/wanderers.  But, at this point, these are only images.  Dreams, really.  Once over the line, they persist reality.  Want to travel as my father did, a pilot, Captain.  See more.  Leave the stationary selection.  That’s what this author needs.  That’s wine.  To me.
11/23/2011, Wednesday 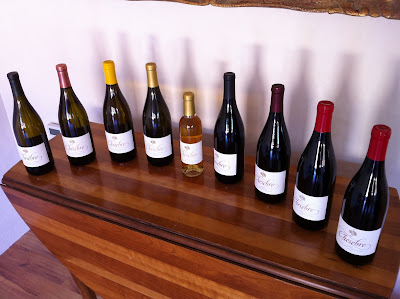 38:  Wine, thanks ...
Mike, there in his hotel.  Business, away from home.  But...fine.  He was fine with it.  He’d had enough wine as his meeting.  They did supply generous portions, as it was Thanksgiving, all away from home, family.  He sipped a beyond-chilled Aquafina water, slowly chewed some peanut M&M’s.  The room, paid.  Were the movies?  Well, if he ordered one?  Turing on the TV.  Movie selections.  “Pretty Woman” ... “When Harry Met Sally” ... one of the Harry Potter bricks ... “Sideways.” Finally something good.  Wine-sewn.  Fine.  Mike watched, scribbled in his Comp book.  Sitting at that darkened desk, far past charisma drought, he chewed another bite.  Red.  Significance, he thought, none.  “Red: blood, guilt...  communism?  Tomatoes, speedy cars, police lights...” He couldn’t find any gravity, symbolic anchor in consumable red ovality.
He went out to his deck, inhaled.  He could smell, taste, hear, tongue touch the ocean.  But couldn’t see it.  Didn’t matter, he thought.  It was there.  He could write its shapes, appearance, form.  All would be confirmed by morning.  His flight wasn’t until 4:15p.  In the morning, he thought, he could go to the nearest caffein cavern, get out some words like he used to on lunch breaks.  Literary Lunches, he called them.
Red, also seduction, he thought.  Maybe his next novel would be a murder-y, suspense-ish, lustful-esque piece, one that could be further surgeried into a screenplay, film.  But he didn’t want to do that, at all.  He was just brainstorming.  Looking right, between the desk, which was surprisingly nice, and the bed was his six carrier of wines from the event.  Walking over, leaning, opening...  Two 2009 Santa Barbara Chards, an NV Blend from Paso, two Sonoma County Merlots, one 2007, the other ’08, and an ’07 Howell Mountain Cab-caressed cuvée.  He needed a glass, small one.  Howell, perfect.  Strong, romantic, seductive.  A red of reds.  “Oh,” he thought, “wine, red is only wine, the only wine I want, now.” Once sips started, he glided over the newly vacuumed carpet to that balcony.  The waves, seemingly louder.  He noticed the nose emboldening.  Maybe he should, too.
11/24/2011, Thursday

Posted by MIKEMADIGAN at 4:08 PM