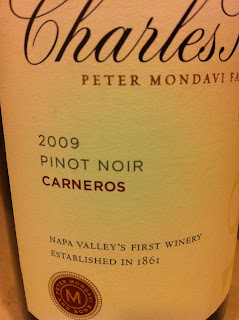 Mike sipped his ’09 Carneros Burgundy, surprisingly.  He wasn’t much of a Pinot pupil.  But either way, it paired smoothly with the chilled beats.  He didn’t want to write about his day, because, frankly, it wasn’t worth scribing.  What was there to work, really?  He wanted to write wine-theme paragraphs.  There was no wine at his work, and he was there over eight hours, multiplied five.  That was his day.  Change, he entertained, soon.  Sipping...  A chewy slightly leathered fruit to his the present, slight spice on finish.  He would love to make a Pinot, like a 60-something case project.  He was positively charged, perplexed how dark it stood in that chubby stemless.  The year closed around him, tomorrow as halfway point to this 11th month.  “Why was time doing this?” he thought.  Kelly probably didn’t care, involved in all she touches with her art, those gorgeous glasses.  At least he had this time, this song, “Sunny Road” by Emiliana Torrini.  His page, Pinot.  Envisioning the Paris Wine Bar, he saw the character sitting down after a shift, all his employees having left.  Just him, her.  They promo out a bottle of 2005 Howell Mountain Cabernet.  Opened, two full glasses, sips, laughs, time theirs.  That’s what Mike, the author needed.  More than his character.
Another Pinot gulp...  Telling him how curtailed existence is.  It told him stop worrying about everything, especially what surrounded him most of the week.  It, entirely meaningless.  That wasn’t wine.  This was.  The Pinot pour, the music, his prose.  The peace it gave him.  That was wine.  If he was going to separate from the elements that him ailed, he need do it now, the wine said.  “Bold Pinot,” he wrote, in the margin of the Comp book’s 24th page.  Mike again poured the Pinot into his sequencing.  Like a nebula’s hum, it sedated his frustration’s turbulent tremolo.
11/14/2011, Monday
Posted by MIKEMADIGAN at 9:17 PM