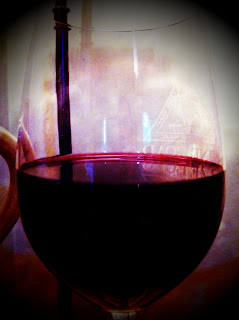 Mike didn’t have to write, but he wanted to.  The email from Kelly, just over an hour ago, from Los Angeles, sent him to placidity, tranquility.  Why she wasn’t calling him--she was away, selling her art.  He knew he needed a sip.  Celebration, or permeation, of sorts?  He didn’t know.  He just wanted to enjoy his night, the wine, music, thoughts of her.  Tilting his glass, he thought of his wine, how it must be developing, how its artful pose would stand on palate, his especially.  Smooth, convinced, coercing Cabernet, just what he wanted from the ’08 vintage.  Everyone talked about 2007, almost all of his colleagues, mentors, and obviously the critics.  He had enough, ’08 was his golden gate.
He was sure Kelly was doing well with her brand.  His needed launching, already.  A non-deliberative dive.  What did he have to lose, he thought.  Looking at his phone, hoping it would somehow ring.  He couldn’t be up too late, as he had to pour at a new winery, early tomorrow.  The Room felt uneven, probably on account he did have to wake early.  Why did he do this to himself?  He needed a day off, he knew.  But to do what?  Write, right?  No, he needed some extra funds, for the Self publishing, his scribbled sessions.  With another sip of the ’08 AV Cab, he fell Self-convinced there was need to fill the little black book, meant to be his winemaker journal; where he’d stuff findings, discoveries, research, observations.  He still wanted to make wine, almost as bad as he needed his books out there, with every reader’s eyes that could reflectively, or even passively, casually, lazily, read.  With all the wine he sold at NWG, he was positive he could sell his, better than any firm or sales serpent sect.  His wine waited for him, he knew it would connect with her palate, eventually.  So he needed it to deliver nothing short of effulgent song.  He wanted it to be her, his wine.  Soft, direct, imbricated, entreating.  Sipping his wine, fantasy fold, following clouds into more titillating transitions.
11/11/2011, Friday
Posted by MIKEMADIGAN at 9:47 PM