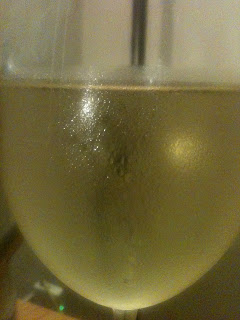 Mike thought about what he posted the previous night, about the wine industry fearing him, his wish.  He stood by it, but he needed it known, he wasn’t in search for clash with “the industry.” He wanted the robotically contradictory facets to understand that he wouldn’t ever be still, muted.  How?  Easy, keep writing as his did.  No compromise.  He was a writer--yes, loving wine--that spoke as osprey hovered about Central Oregon peaks, streams, embankments.  He sat there, with what was left of the 2010 Lancaster SB he opened the other night, in his glass.  Looking at the blank screen.  He just wanted to sip, for once.  Listen.  Be a guest in his Wine Bar.  A customer.  No, consumer.
He didn’t pay for his glass.  Didn’t have to.  Envisioning himSelf back in Paris, he knew he had to be there, ostensibly, after year’s turn.  He wanted to buy the song he hear on the Pandora station, “Where It All Starts,” by Thievery.  But didn’t click that link.  He was appeased by the simplicity, the tasty concurrence of song sequence.  He was in a Wine Bar, delightfully envisioned.  Till bed, he was sovereign.  Autonomous oenoWorld.  His.  This effectuation beckoned a sip.  Three.
This countdown, for what?  He didn’t know.  Not yet.  This was paginated Cubism.  His, solely.  It couldn’t be duplicated, he thought.  As no one thought his thoughts as he them thought.  He wanted back in the classRoom, realizing in the seat of his immediate Wine Cave.  He didn’t like the word “bar,” either, in moment.  Current track, from a Bombay trip-hop mixtape.  Its likeness beatified his vision’s muralized panorama.  Soon, he thought, inoculation for this industry’s predictability, expectations.
Under sheets, he thought of Paris, again.  All its characters, images, activity.  The metro’s chirps, honks, voices.  He needed them back in his ears.  Not counting today, he had 123 days to produce the manuscript that would take him back to his hotel’s high floor.  Or wherever he wanted.  Spain, Portugal, Africa.  He always told his students, “You can write your way through and out of anything.” And as his father recently said, “All that you impressed upon your students, shared with them about being independent, sovereign, as thinkers, has now fallen into your lap.” Tomorrow morning, he’d have plenty useful thoughts, commuting to NWG.  He was sure.  And, he thought, he’d pull over to write them into the Comp book.  Or on the new yellow pad.  He didn’t care, about them.  He cared about he; the prose, poetry; sovereignty, Autonomy [capital intentional].  He didn’t log any notes, descriptors for the Sauvignon Blanc, he realized, turning on his right side.  He spoke into a green pillowcase: “Yummy.”
8/30/2011, Tuesday