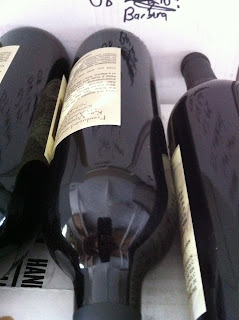 As I’m now a winemaker, very much beginning, who else would I turn to, other than my sister, but KazMaster Kaz himself?  He and I poured together today, in the Room, but I also had the opportunity to watch him make his Chardonnay.  He picked his white fruit yesterday, all estate if I’m not mistaken, and today transfered some of it from the plastic bin to a steel barrel, then the plastic’s bottom matter to two beer kegs.  Kaz explained all the flavor strategy to me, further instilling in this penman that winemaking is my next everlasting effort.  Kaz and I also took a couple walks through his estate vineyard, inspecting the fruit and conversing over what the coming rain might do to the berries.  Interesting, this winemaker role.  He’s been bottling for over 25 years.  Me, yet to even set foot in my first vintage with Katie, and Kaz.  Excited, more positively anxious than I’ve ever been.  One step closer to my own Room.

And, as always, I was in character with camera in hand.  Every time I’m clocked into Kazzy’s tasting Room, I find mySelf more entranced by barrels than I ever am elsewhere.  such an image resonant.  Fun guests, as always.  From as near as San Francisco to as distant as Boston, kid.  Light traffic, though.  But you can never predict with Sundays, pretty much anywhere in Kenwood.  The whole day, though, winemaking was on the brain, especially when Kaz-a-lot showed my the yeasting process, which I’ve always been mystified by.  No one ever took time to show me.  But then, I never asked.  Kaz said, when I inquired about the process, and importance of yeast addition in winemaking, “You’re going to see today,” as if he planned on such instruction.  Far beyond appreciated.  Hope I never have to pay him back for all he’s done for me, since I met him much less merely today.  No way I could ever reciprocate his graciousness, generosity, instructional willingness.  His greatness. 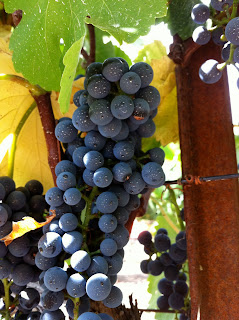 Looking through my pictures, reviewing the interview I did with him in the Syrah block of his estate.  Wine, I now find, is dangerous in its injection of curiosity, especially to alertly frolicsome penmen, the avidly Literary.  My wine, hoping it reflects my love for characters loving wine as I do, as my sister does, as Kaz does.  Aiming to have my first vintage, this 2011 oeno-episode, exude wine Humanness.  The curiosity, exploration, planned and unplanned.  All this in mind, as I make my wine, I promise.